Customers report on their listening tests with OMEGAMIKRO/Clearview products.

A series of perhaps ten separate experiments involving various combinations of the Micropoint Megafeet footers, amp position, large ebony triangles and the Ebony Interface Pucks footers with various configurations of fastened elements, some glued to and some screwed into the pucks, yielded the following summary observations:
-- moving the amp from its position on a 4" maple amp stand on Isoblocks on the floor up onto the bottom 4" maple shelf of my Samson rack significantly improved the sound
-- the best sound from all experiments was achieved with the following configuration:  an M3 size acorn nut was glued to the underside of the amp.  The nut's pointy tip, facing down, was resting on an Ebony puck with its three standard tiny brass washers resting on the rack shelf.
-- the big brass Mapleshade Micropoint Megafeet resting on pucks with the amp sitting on the Megafeet was close, but in my system the preceding setup was slightly better, although this is not a firm finding.  Also, the Megafeet take 3" of vertical space on the rack.
-- I also tried the Ebony pucks under my speaker spikes in place of the stock stainless steel "shoes", and the sound was a little better.
Other comments:
-- when using three acorn nuts glued to the bottom of the amp for purposes of resting on Ebony pucks, spacing the nuts should be as large a triangle as possible, with at least one nut close to the spot of greatest electronic activity on the amp base
-- acorn nuts should be as pointy as possible.  I could find none that were very pointy, but there are differences in pointiness among those I saw online.
-- the M3 size nuts were important, and were better than smaller ones (2-56) and larger ones (M5).
-- my system is a classic two channel system, streaming only, Vandersteen Model Seven MkII speakers, dCS Rossini DAC/CD player, and Aesthetix Atlas Eclipse stereo amp, all on a large, five-shelf Mapleshade Samson rack.
-- once the acorn nuts are glued to the amp, it requires some effort to position the pucks with the nuts resting accurately centered on them, although absolute accuracy is probably not important.
-- I used Krazy Glue instant glue.  Loctite also makes a good one.
-- these experiments were conducted compared to stock feet on a 4" maple stand.  Along the way I have also used Finite Elemente Ceraballs and Nordost Sort Cones (the middle model, brass?), the latter creating an obvious improvement.  I have not tried the uber expensive Stillpoints, or other of the many footer brands available.
Overall none of this effected a jaw-dropping improvement.  However up in the airy regions where a lot of our systems reside, a small improvement is welcome.  The cost of the acorn nuts and Ebony pucks materials I've used and incorporated into my system are a bargain compared to the prices of many other footer systems. 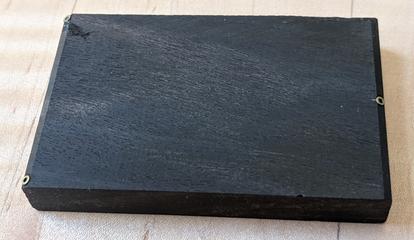 Hi Ron,
Thank you so much for your fast response,  I just couldn't wait to give it a try!
I liked the third recommendation best since it won't cause any potential damages to the cable.  I went to Home Depot and got some brass, not copper, parts and made a set of adaptors based on your instruction for less than $14, see attached photos.
I also found some similar product on Amazon:  CESS-130 Pin Screw Type Banana, Speaker Pin Plugs for Speaker Wire, 4 Pack

(IAI response)
1. Solder a short length of wire, say 20 gauge copper or silver plated copper,  to the ends of the PS1 spade lugs.  .
2. Using a scissors, cut one edge of each spade lug length-wise so that it becomes narrow enough to fit into the spring loader. The remaining wider portion may be folded back and away from the connection point.
3. This idea does not require any changes to the spade lugs. Shape a small bare copper  or silver plated copper wire, say 20 gauge, into a loop with a tail. The tail fits into the spring loaded connection and the loop should be formed small enough so that a small brass screw, washer and nut can be inserted into it.  Slip the end of the spade lug under the washer and tighten the nut. Then use a  small length of very thin polypropylene packing tape to wrap the wire loop and spade lug so that it does not short circuit. This won't be pretty but it will preserve the original PS1 and sound as good as the other options.
Please let us know how you solve the problem so we can help other customers with similar problems.

(from customer to IAI)
My vintage Sansui amp and receiver have the spring loaded pin connectors for speaker wires.
I'd like to use OM Planar PS1, an old style has wide and flat copper ends with a small half circle cutout, with them.  What choices do I have? 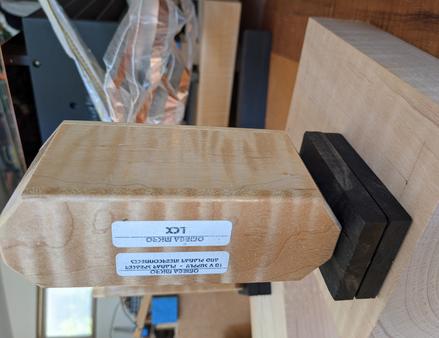 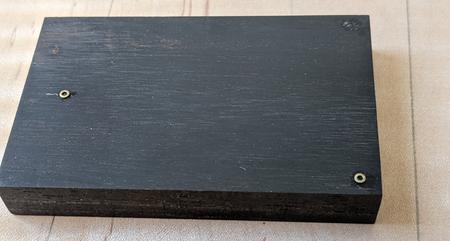 These configurations did not sound quite as good as the baseline EBONY PUCKs with their ultra-thin brass washers. 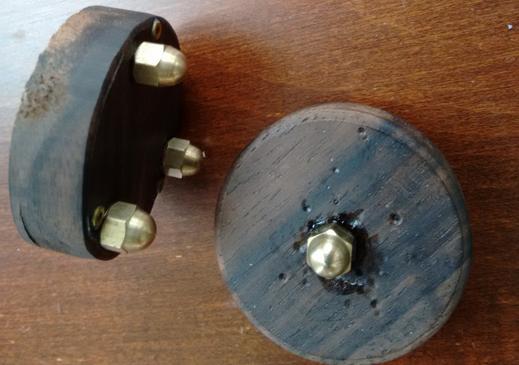 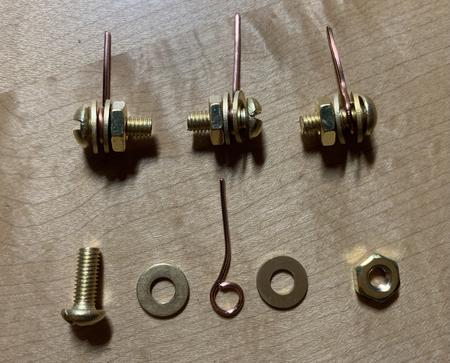 I also did two small improvement over the weekend:
1. Cut off the extruded portion of the bots so they are flush with the nuts to avoid potential contact and providing smooth surface for the tape.
2. Used Mapleshade LDA tape instead of packing tape
Have a great week,

After discovering that ebony and brass washer platforms sound better with very small washers – 000 washers have more color, better dynamics, etc. than 00 washers– I wondered how small a contact patch one could get between the washers and what they were sitting on.

Experimenting with small (1.75 x 2.8 x .4) rectangular ebony platforms for active cable  battery boxes, I discovered that if I cut a small bevel, at 30 degrees to horizontal, on each short end of the underside of the platform, roughly as wide as the washer itself, and glued 2 washers to one bevel, and a third in the center of the other bevel, with the washers completely contained by the bevel, the contact was roughly a single point, limited only by the compressibility of the ebony and the brass of the washer.  Again, there was a significant improvement in the sound, compared to the 000 washer glued flat.

In playing with these, and in other experiments, my experience is that the best sound occurs when the upper surface of a platform is oriented to what would have been the outside of the tree, and the lower surface oriented toward what would have been the center of the tree.  Looking at the end grain of platforms, one wants to see the grain lines in a rainbow pattern, rather than a series-of-troughs pattern. (Note:  The battery box shown is not very stable, and I will be experimenting with larger pieces of ebony and laying the box on its back, or side, etc.)

July 8, 2021
Ron,
Thanks for your suggestions regarding situating my modem.  I followed them and my system's sound improved, basically became cleaner and clearer, a nicely audible improvement, actually a bit surprising to me.  Most important was your citing how important the situating of the modem is, as the entry point for the signal for my whole (streaming) system (it's a Comcast modem).  I see that it needs the same careful positioning and resonance noise reduction as any component, even though it's about 40' away from the system (connected via CAT 6 ethernet wire).  I'd had it sitting on a thin piece of oak resting on flimsy metal brackets that were screwed to a vertical wooden rectangular piece--a poor setup.  When I put the proven ebony pucks/acorn nuts under it as footers in this setup, it did not help, and perhaps even degraded the sound further.  So I totally restructured the setup.  I removed the flimsy brackets and screwed heavy stainless steel ones to the wooden backdrop, and then sat a thick and heavy maple cutting board on the protruding legs of the brackets to serve as the platform for the modem to sit on.  I then installed the pucks/nuts footers in the standard way, i.e., glued the acorn nuts to the bottom of the modem and then sat it on the pucks, with the nuts' tips resting on the pucks and obviously the pucks sitting on the maple cutting board.  I have not fastened the maple board to the brackets' legs by screwing it to them--it is just resting on the brackets.  This is mostly because it would be hard to do because of where the whole apparatus is located, and I'm not sure it's necessary.  However, also because I was careful to address this issue by ensuring maximum flat surface contact of the board on the bracket legs, and also because, in a flash of brilliance, I installed a strong spring clamp with a very tight hold to clasp the board tightly to the bracket legs.  As for the cutting board, I'm not sure how well it suits for this purpose--I suppose a solid thick piece of northern maple would be better--but the cutting board is maple, it's very old and hence dry, and is the only thing I had in the house that might suit.  Thanks for the good advice.
Jim Heckman, Pennsylvania 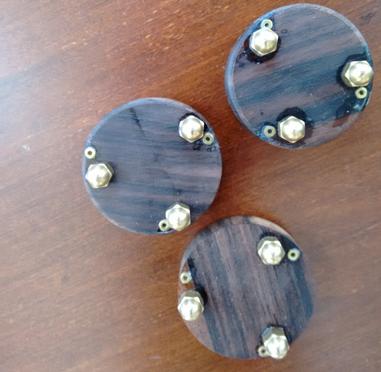